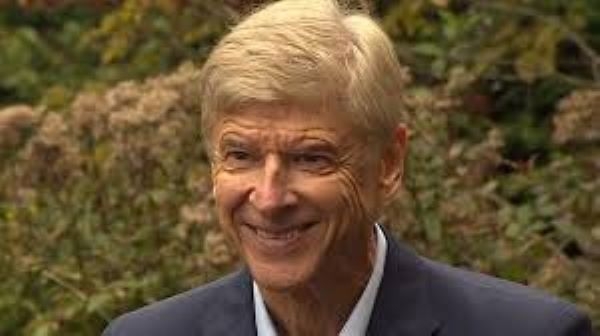 Wenger joined Arsenal in October 1996 and managed the club for 22 years, winning three Premier League titles and a record seven FA Cups. He also created history when the Gunners went through the 2003-04 league season unbeaten.

Since leaving Emirates Stadium, the Frenchman has taken up a role at football’s world governing body Fifa, overseeing the global development of the game.

Here the 70-year-old talks to BBC Sport about the past, the present and the future.The past

What does Arsenal mean to you?

The love of my life. I gave 22 years of my life to the club. I built the training centre and I built the Emirates Stadium. I gave a lot of sweat to get the stadium money paid back and to create an atmosphere and infrastructure to allow this club to do well and invest in the future. I think we are in a good way.

I’m a little bit like a guy who’s ended a relationship and has no contact with his children any more but he still loves them.

In hindsight, was signing the loan agreement for the Emirates Stadium a mistake?

I accepted it because I thought it was a challenge. The first 10 years we were competing to win the championship but I knew the next 10 years would be more difficult. I believe we played outstanding football, we were in position sometimes to win the league but we were much younger [as a squad] overall.

I may be even prouder of the second part of my career than the first part because the first was easy. The second was tougher and I was really tested in my resilience. I’m very proud to have served the club during such a delicate stage.

I have chosen to keep a complete distance. It doesn’t mean emotionally, just physically. It’s important people don’t see you as a shadow. It may look like you’re still trying to influence things and have your way. I felt that the best thing to do is cut it away.

Towards the end of your stay at Arsenal there were protests and demonstrations. Did they hurt?

I don’t believe you should rate highly what a fan says in the moment – a fan says something based on the moment, based on emotions. Today it seems the minority has a big dictatorship. They dictate what is talked about, therefore if you have 50 people on social media being negative it can somehow get more attention than 60,000 people in a stadium.

It doesn’t mean everybody has to do what they talk about. If you look at our last three years you will see in 2016 we finished second – OK, it was behind Leicester City but every other club finished behind Leicester too and they lost only three games. In 2017 that was the first time we were not in the Champions League since 1997.

So, yes, I wish we had maintained that record but I think this year we have a good chance in order to be back in the top four.

You had a fierce rivalry with Sir Alex Ferguson at Manchester United and Jose Mourinho at Chelsea – is that still the case? Are you in touch?

I rarely keep in touch because I’m not in the country a lot. I respect them. When you’re in the competition it’s you or them so it’s always a bit aggressive. But after, when you meet people outside the competition, it’s not so.

You both suffer, you both have difficulties with your team, but you have to defend your club when you’re in there at any cost and that’s why sometimes it gets a bit out of control. Overall there is a respect to always talk things over.

As manager at Arsenal, you turned down offers from Real Madrid twice, Bayern Munich, Juventus, Paris St-Germain, France, England and Manchester United – which of those were you closest to taking?

Certainly Real Madrid – because you do not know many people who turned them down twice. And it was to stay with a team which doesn’t have the resources to win the championship. But I told myself if I was going to go for the challenge of managing Arsenal, I would go until the end.

Who were the toughest team or players you came up against?

Team: Wimbledon when I first came to England. Players: Roy Keane and Alf-Inge Haaland – they were always tough to play against.

With such a glittering career there can’t be many regrets, but Arsenal were always linked to big names. Do you ever sit and wonder: ‘What if?’

Of course I think what if, for example, Cristiano Ronaldo played with Thierry Henry, [Robert] Pires, [Sylvain] Wiltord and [Dennis Bergkamp]. Maybe we score 200 goals in a season!

You regret sometimes, you think it’s your fault that you didn’t decide quickly enough or sometimes financially you couldn’t agree quickly enough, but overall I must say you go to Chelsea, you go to Manchester United, you go to Liverpool… every club is full of stories like this.

Do you wish you’d signed Zlatan Ibrahimovic instead of inviting him for a trial?

Not really, because he was a 17-year-old boy playing at Malmo in the second league in Sweden. And nobody knew him. We gave trials to many players at 17 – it was absolutely normal before you make a decision.

What do you want your legacy to be?

Somebody who served his club with total commitment and integrity and honesty and who loved the club. I gave Arsenal the best years of my life. In different circumstances, but I always felt with the same passion.The present

Is it true you still wake up and go through the same routine as when you coached, including two hours at the gym every day?

That’s true, even at weekends. Sport is like brushing your teeth – if you do it once a week it’s not very efficient, but if you do it every day it’s more efficient.

How much football do you watch now?

All I watch is football. In the morning I watch the games that were on last night. It’s my passion. When you’re born, your first instinct is to survive. Then you must find the meaning of your life. My life is football.

I grew up in a little pub where the local football team had their headquarters. From the age of four or five I heard people talk only about football so certainly in my mind it was the only important thing in life.

Is Arsenal in good hands under current manager Mikel Arteta?

Yes. He has the ingredients to be a very good manager, a top manager, but many of my former players had these ingredients. We have to give them time, let them do their job in the way they want to do it.

He’s intelligent, he has big passion and a strong character. And I believe he’s surrounding himself with the right people.

You signed Mesut Ozil for a then club record fee of £42.4m – what do you make of his career currently?

I feel it is a waste for him.

Firstly because he’s in the years where a player of his talent can produce the most. And it’s a waste for the club as well because he’s a super talent, a creative talent that in the final third can create that killer pass.

The way football is going at the moment it’s quick counter-pressing, quick transitions and everybody plays the same. It’s kicked out players like Ozil. Although let’s not forget who this guy is. A world champion who has played at Real Madrid.

He’s been the record player of assists, so you have to find a way to get him involved again.

You’re a huge supporter of VAR, but can you understand the frustration others have with it?

First of all, let’s ask ourselves: is VAR efficient? When you look at the stats, reviews show they have moved from 84% of right decisions to 95%. It’s a system above our opinions.

The second thing is it fights against corruption because one man cannot alone influence a decision. For me this is something important because that was not always the case. Yes, sometimes it can be slow but I believe if we suppressed it people would want it back.

Last year, people didn’t accept the offside rule. This year nobody talks about it. It’s nothing to do with money, you just want the right decisions.

Are punishments for incidents of racism enough?

We cannot tolerate racism and I believe sport, and especially football, has a huge responsibility – to show how we can live together, share what we love.

I think we cannot tolerate racism in the stands. We have to punish it. How to punish it? We haven’t found the right answer yet. I believe having cameras to recognise the people who are doing it and ban them for life.The future

Your job now is developing the game. You want to get rid of throw-ins…

When you have a throw-in, it is supposed to be an advantage for the team in possession. But in reality you’re at a disadvantage with nine players on the field to the opponents’ 10. Also, you have to use your hands to play the ball. I would say you have more chance to lose the ball.

That’s why I believe we always have to think how can we make the game quicker and more spectacular. So why not be able to kick the ball in when in your own half?

We always have to try to think how we could make the game quicker and more interesting, and most of the rules that have been created have led to a more spectacular game. I believe as well that you should be able to take a free-kick (multiple touches) for yourself when you get kicked down.

I want to give everyone the same opportunities. In Europe, we are in a bubble. There are countries where kids can’t access coaches and there isn’t the infrastructure. I want to create an online programme that everyone can access. It’ll detail what the child should be learning at what age, how often they train, when to increase the difficulty of the exercise.

As for the women’s game, the attendance at World Cup is always high but outside of the World Cup very minimal. It’s not enough to invest big money, to pay good wages for girls to dedicate their lives to being footballers. That’s why you need to develop the quality of the game.

We need as well to develop the infrastructure because at the moment men’s pitches are fully booked over the weekends so if women’s football developed and grew as much as we want it to, we will need to build new pitches.