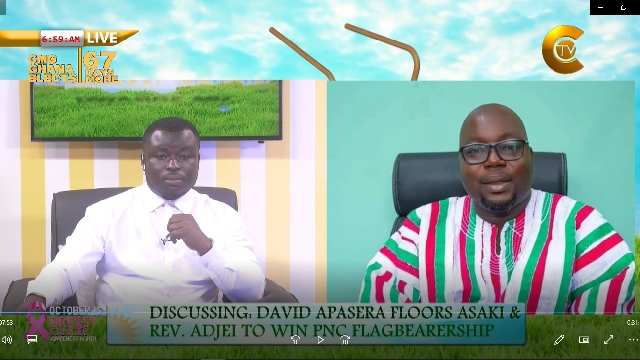 A defeated flagbearer aspirant of the People’s National Convention (PNC), Mr Samsom Asaki Awingobit is angry and disappointed that the Upper West regional arm of his party did not vote for him in the party’s just-ended National Delegates Congress even though he printed 1,000 posters each for three of the PNC’s parliamentary candidates in that region.

A former MP of the party, Mr David Apasera, won the flagbearer slot to lead the PNC into the 7 December 2020 polls.

Expressing his disappointment in an interview with Anopa Dwabre Mu host Kwame Appiah Kubi on CTV on Thursday, 1 October 2020, Mr Awingobit explained the Upper West Region should have voted for him since he had extended his largesse to three parliamentary candidates there, through which he demonstrated his readiness and ability to support them to get into parliament to represent the PNC.

“Why I’m disappointed in the Upper West Region is that, I went to see three MP aspirants in the region and supported their parliamentary candidature”, so, in his view, it was “obvious” that they should have voted for him.

“Even the regions that I won, like Western North, Northern Region and others, I’ve not done even a single poster for any parliamentary candidate because they’ve not brought the list of their candidates to me yet.

“So, I was thinking that they’ll say: ‘Look, if we’ll support anyone in the region, let’s support the one who supports our parliamentary candidates that will register in parliament as Members of Parliament for the party.

“That should be a source of motivation to them”, he said.