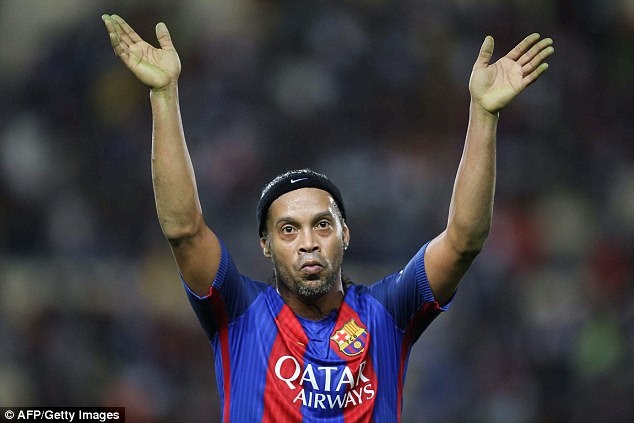 Brazil and Barcelona legend Ronaldinho has confirmed he has tested positive for coronavirus.

Ronaldinho, who won 97 caps for Brazil between 1999 and 2013, posted a video to his Instagram story revealing his diagnosis.

The 40-year-old said he is asymptomatic and is self-isolating in Belo Horizonte, having arrived in the city on Saturday.

“I’ve been here in BH since yesterday, I came to participate in an event,” Ronaldinho said on Instagram on Sunday.

“I took the test and tested positive for Covid. I’m fine, asymptomatic, but we’ll have to leave the event for later. Soon we will be there together. Big hug!”

It has been a turbulent year for Ronaldinho who, along with his brother Roberto Assis, was jailed in Paraguay in March after entering the country with fake passports .

The pair were moved to house arrest in a Paraguayan hotel in April after serving 32 days in prison, with their sentences ending in August.

“It was a hard blow, I never imagined that I would go through such a situation,” Ronaldinho said at the time.

“All my life I have sought to reach the highest professional level and bring joy to people with my football.”

The Brazilian became one of the most iconic figures in football history over the course of a playing career which lasted 17 years.

Ronaldinho won titles in Spain and Italy as well as the 2005-06 Champions League. At international level, he lifted the World Cup, Copa America, Confederations Cup and won Olympic bronze in 2008.

He won the Ballon d’Or in 2005 and was twice named FIFA World Player of the Year.

Former Barcelona winger Gerard Deulofeu recently said he thought Ronaldinho was the greatest player ever – ahead of Lionel Messi.

He told Serie A’s official website: “For me, Ronaldinho is the best player in history. I met him, I went to see a match at the Camp Nou and he was sitting next to me. It was a wonderful experience.

“Messi is incredible too, I like him very much. I played with him for six months and he is a nice person, a great player. The whole world knows about Messi.”