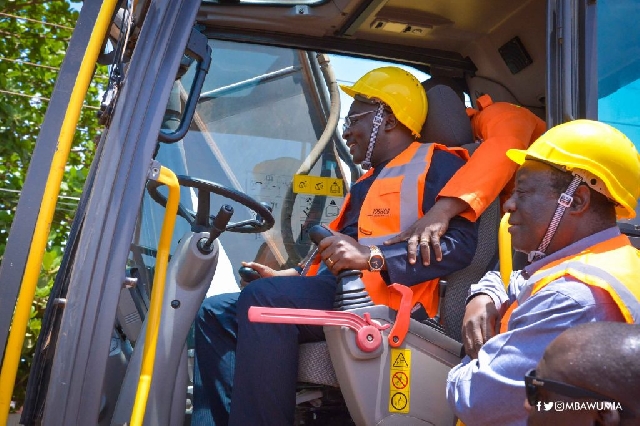 The 26.6-km project, which cost an estimated $100 million, is expected to be completed in 24 months and is being undertaken by Messrs Gansu International Corporation and Messrs China Major Bridge Engineering Company Limited.

The first lot of 16 kilometres begins from the Independence Arch to Nungua while the second lot of 10.6 kilometres continues from Nungua and ends at Tema Community 3.

Per the classification of urban roads, the Accra-Tema Beach Road is the southernmost arterial road in the Greater Accra Region and links the western and eastern parts of the region.

Portions of the road were dualised some years ago while other sections have remained single carriageways.

Explaining the details of the project, Dr Bawumia said there would be a three-tier interchange at the Nungua barrier to address congestion problems road users were experiencing.

He said the stretch between La and Tema was critical as it served as a primary link that gave access to historic communities such as Osu, La, Teshie, Nungua, Sakumono and the Tema Harbour.

He said its improvement came with major benefits for both residents of the communities along the belt and the country at large.

He said there was construction taking place everywhere in the country and made possible by the Ministry of Roads and Highways under the leadership of Mr Kwesi Amoako Atta.

In a surprise attempt at speaking the Ga language, the Vice-President said in faltering Ga that even though past governments had vowed to construct the road with contractors coming and leaving, it was President Akufo-Addo, the deliverer of promises, who said he would do it and has done  it.

He assured the Nungua Mantse, King Professor Odaifio Welentsi III, and all present at the ceremony that work will flow continuously to the end because money for the project was ready.

Other interchanges under construction that he mentioned were the Tamale interchange and the Obetsebi-Lamptey interchange in Accra.

The Vice-President announced that the Adentan-Dodowa road would be dualised while roads in Sunyani and Berekum would be improved.
He said another sod would be cut early next month for an interchange at PTC in Takoradi and pointed out that “In all, there will be six interchanges in this government’s first term”.

The Minister of Roads and Highways, Mr Amoako-Atta, said when the Accra-Tema Beach Road is completed, it would reduce congestion, improve capacity and mobility as well as safety on the stretch since adequate provisions had been made for the construction of drains and new bridges to prevent flooding.

Mr Amoako-Atta warned hawkers to refrain from interfering with the work and not to also use the road as a place for selling.

King Professor Odaifio Welentsi III expressed delight that work on the road had commenced, saying that the project was long overdue.

“It is a dream come true to see words put into action by this government. The people of Nungua are forever grateful”, he added, and called on the President to ensure that the project was not stalled.