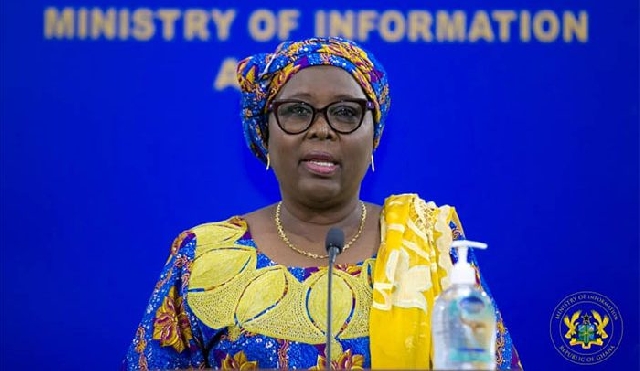 The Chamber for Local Governance (ChaLoG) has said the Minister of Local Government and Rural Development, Hajia Alima Mahama, has failed terribly at delivering on the governing New Patriotic Party’s (NPP) manifesto promises regarding her ministry and, thus, rates her performance at 40 per cents.

ChaLoG believes the minister deceived Ghanaians when she scored herself 90 per cent.

In a statement issued by the Chamber on Thursday, 27 August 2020, and co-signed by its President Dr Richard Fiadomor, Executive Secretary Romeo Elikplim Akahoho, Public Relations Officer Alhaji Ibrahim F. Faila and Director of Research Ing. Joshua Quist, ChaLoG noted that it was shocked “when the minister gave herself that score at the ‘Meet The Press’ event on Wednesday.

ChaLoG gave its own rating of the promises made by the NPP in its 2016 Manifesto Highlights (page 53) regarding the local government sector, thus: ‘The NPP will oversee the direct election of Metropolitan/Municipal/District Chief Executives (MMDCEs) within 24 months of election into office to coincide with the next District Assembly Elections in 2019 (Delivered though abortive), strengthen the sub-structures of MMDAs through Capacity and adequate resource allocation (Delivered), strengthen the role of traditional authorities within the local government system (Not Delivered and traditional authorities nearly taken out through the abortive referendum), Improve allowances pay to Assembly Members (Not Delivered and now we are being told it is against international best practice for part-timers to be paid by MMDAs), Upgrade the Tamale Campus of the Institute of Local Government Studies into a modern state-of-the-art institute to train local government practitioners and staff in Northern Ghana (Not Delivered)’.

It continued: ‘Abolishing the current practice of central government manipulation of the DACF through the procurement process (Not Delivered and in fact worse than it was before the NPP government took power in 2017), Decentralising and equipping the Land Valuation Board (LVB) to provide direct technical support on property valuation to MMDAs for enhanced revenue mobilisation (Not Delivered), Ensuring the speedy enactment of the Municipal Finance Bill, initiated by the Kufuor-led administration into law, this will provide space to MMDAs to access the capital market for rapid socio-economic development and partner the private to provide job opportunities to local people (Not Delivered)’.

ChaLoG continued that the NPP also promised to “ensure the consolidation of all existing national sanitation policies, plans and programmes into a National Programme and Action Plan and establish a National Sanitation Fund to fund it (Not Delivered even though this particular one is supposed to have been implemented by the Sanitation Minister).”

According to ChaLoG, with the stated promises by the governing party, and the “non-delivery rate of the minister,” it is “convinced beyond all reasonable doubt that the local government minister has woefully failed to deliver on the NPP’s Manifesto promises on the local governance sector and should be scored 40% on her performance at the ministry and not the self-assessment score of 90% as Ghanaians are being made to believe.”

It added: “But for the President himself not committed to deepening and consolidating decentralisation in Ghana, the local government minister should have been sacked after two years in office.”

Also, a total amount of GHS 503,627,551.12 has been mobilised and transferred to the MMDAs for implementation of activities in their MTDPs between 2017 and 2020 under the FOAT/DPAT.

“This year, we have transferred an amount of GHS 185,931,850.00 to successful MMDAs as their Investment Grant allocation for DPAT II (2017) Assessment”, she emphasised.

The minister also took time to brief journalists about the Business-Enabling Environment Project (BEEP), which her ministry has rolled out.