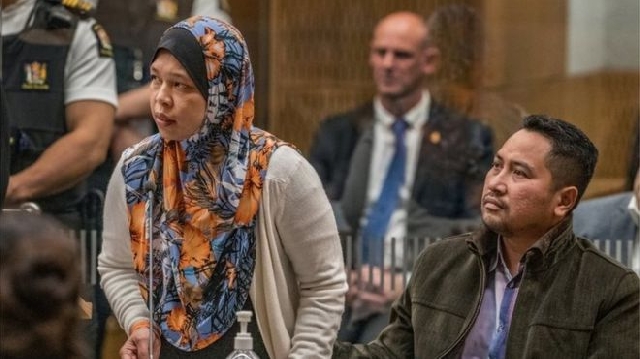 Survivors and families of victims of a mosque shooting in New Zealand have spoken out against gunman Brenton Tarrant, in the third day of a four-day sentencing hearing.

There was a sense of grief – but also one of defiance – in the air as almost 90 people spoke about the incident that killed 51 people in Christchurch.

He has chosen not to speak in court before his sentencing on Thursday.

The 29-year-old Australian has pleaded guilty to 51 counts of murder, 40 attempted murders and one charge of terrorism.

He faces life in prison, possibly without parole – a sentence never before imposed in New Zealand.

In a courtroom on Wednesday, there were tears cried, Koran verses read and photographs of loved ones held high, as the last of the victims and relatives gave their statements.

Here are some of the powerful statements that they made.

‘These tears are not for you’

“My name is Sara Qasem. Daughter of a shining glimmering man… of Abdelfattah Qasem – remember that name,” the 24-year-old said.

She spoke about the last moments of her father’s life, saying: “I wonder if he was in pain, if he was frightened, and what his final thoughts were. And I wish more than anything in the world that I could have been there to hold his hand and tell him it would all be ok. But I couldn’t do that.”

She added that she had plans with her father that would now go unfulfilled, saying she wanted to “go on road trips with him. Smell his home cooking.”

Ms Qasem composed herself as she started crying, looking at Tarrant and saying “these tears are not for you”.’My son asked, why did he kill my baba?’

Hamimah Tuyan, the wife of Zekeriya Tuyan, who battled for 48 days before succumbing to his injuries, spoke about missing her husband.

“No amount of money can bring back the father of my sons and my husband. I miss [his] cooking, his lame dad jokes, his snores. He was my bodyguard, my entertainer, my comforter, my best friend,” she said.

“My eldest son only has five years of memories with his father, my wee one – not enough. My son asked, why did he kill my baba? To help the children understand, I explain to them that the ignorant man is like the boy in their preschool that doesn’t know how to play with the other children in the pre-school, so he communicates and expresses his fear by hitting them first.

“I see the longing in my son’s eyes as he watched other boys holding hands, building Legos with their fathers – how do I, their mum, console their aching hearts? My sons love their baba so much that they will jump on him, plant kisses all over him every day. Now their baba will not be here to celebrate their future successes – they will not have him to lead them by example.

“[But] your heinous acts brought thousands of New Zealanders together in solidarity with us. I feel like you are the victim here – we are the survivors.”

‘You became trash of society’

Ahad Nabi lost his elderly father Haj at the Al Noor mosque. Clad in a New Zealand Warriors rugby league jersey, Ahad did not hold back his fury when he spoke to Tarrant.

Calling Tarrant a “maggot”, he went on to say: “Your father was a garbage man and you became trash of society. You deserve to be buried in a landfill.”

He also called on the judge to ensure that this “scum never be allowed to walk from the prison in his lifetime”, adding that his “71-year-old dad would have broke you in half if you challenge him to a fight”.