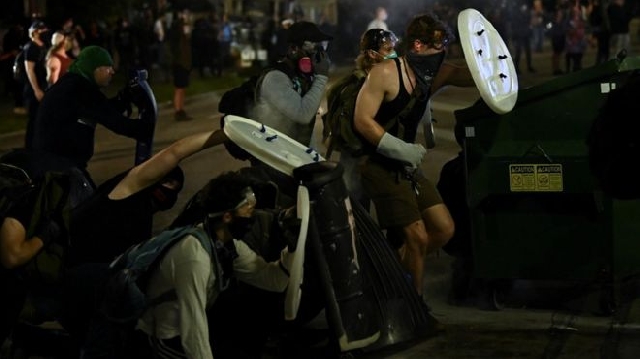 Two people have been killed and one injured during a third night of unrest in the US city of Kenosha, sparked by the police shooting of a black man.

Police said three people had been shot, but gave no details about who was involved.

Local media reports earlier said the violence was believed to have stemmed from a conflict between protesters and armed men guarding a petrol station.

Unrest broke out after Jacob Blake was shot and injured by police on Sunday.

Video footage showed the 29-year-old being shot a number of times as he leaned into a car. His lawyers said it would take “a miracle” for him to walk again.

People have since defied emergency curfews in the city to join protests, which at times have turned violent.

In their statement, Kenosha Police said officials responded to “reports of shots being fired and multiple gunshot victims” in the city at about 23:45 on Tuesday (04:45 Wednesday GMT).

“The shooting resulted in two fatalities and a third gunshot victim was transported to a hospital with serious, but non-life threatening injuries,” the statement said.

It added that the identities of the victims were still being determined and that no further details would be given at this time. An investigation has been opened.

Kenosha County Sheriff David Beth earlier told the New York Times that an investigation into the shootings would be focused on a group of men armed with guns outside a petrol station.

Footage shared online showed a man with a rifle being chased by a crowd before he fell to the ground and appeared to fire multiple rounds at them. Other video shows armed civilians, many dressed in military fatigues, congregating outside businesses they said they were protecting.

Footage also shows people running through the streets as gunshots ring out, and wounded men on the ground.

Wisconsin Governor Tony Evers said on Tuesday he was sending more National Guard troops to the city amid the unrest.How have the protests unfolded?

Within hours of Mr Blake’s shooting on Sunday, hundreds of people had marched on Kenosha’s police headquarters. Cars were later set alight, and police urged 24-hour businesses to consider closing because of “numerous” calls about armed robberies and shots being fired. A night-time curfew was imposed.

On Tuesday, hundreds of protesters marched through the city. A small group threw fireworks and water bottles at police, who responded with rubber bullets and tear gas.