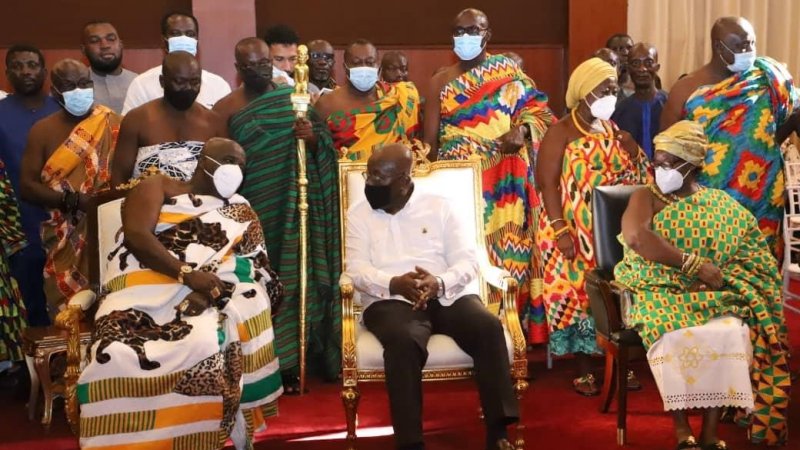 President Nana Addo Dankwa Akufo-Addo has vowed to bring to an end to the proliferation and scourge of illegal small-scale mining before his new term in office expires.

He said his new administration would be adopting a heavy-handed approach towards illegal mining, known as ‘Galamsey’, to stem the environmental problems and challenges associated with the practice.

“I intend to do everything in my power to bring this galamsey menace to a conclusion,” the President said on Friday when the Okyehene, Amoatia Ofori Panin II called on him at the Jubilee House, Accra.

The Okyehene was accompanied by the Okyehemaa, Nana Adutwumwaa Dokuaa, and a host of eminent chiefs from the Akyem Abuakwa area, in the Eastern Region.

They were at the Presidency to officially congratulate President Akufo-Addo on his victory at the 2020 presidential poll, commend him for his sterling leadership in the country’s fight against COVID-19, as well as table a number of request for consideration.

President Akufo-Addo harped on the need to enforce mining laws and end illegal mining in the country, saying that all the major rivers that are the lifeblood of water systems across the country, as well as forest reserves are being destroyed as a result of unregulated mining activities.

He told the Okyehene and his entourage that though the initial attempt by his government to curb the Galamsey menace fell short of the desired results, he would not relent on the fight to protect the environment for posterity.

Illegal mining, for years, has received widespread public concern in Ghana, with the country fighting an ongoing battle with illegal miners operating in major forest reserves and rivers.

Although Ghana has had a formalised process for engaging in artisanal small-scale mining, more than 85 per cent of small scale miners operate on illegal basis in the country.

Particularly disturbing is the participation of foreigners, who employ highly exploitative machinery that is having significant adverse implication on the country, ranging from revenue loss, destruction of farmlands, heavy degradation of land and the alarming pollution of water bodies.

Efforts by successive governments to stop the Galamsey practice have been short-lived.

On assuming the reins of power in 2017, President Akufo-Addo’s administration classified “galamsey” as a major challenge to the country, and has since been taking measures to curb the destructive practice.

President Akufo-Addo thanked the Okyehene, the Okyehemaa, ,and the traditional leaders for supporting him to become President.

“As a son of your land, I will do my best not to disappoint you. I will never bring disgrace to you. I will work to bring pride and honour to the Okyeman,” he said.

The President entreated the chiefs and traditional leaders to support him and his administration to succeed, adding that his success would be their success and the success of the entire nation.

He also urged them to contribute to the success of the Decentralisation process by reporting non-performing District Chief Executives in their area for the necessary action to be taken.

He disclosed that his administration would do extensive consultations before appointing DCEs, and asked the chiefs and people to make recommendations in the process.

On a request by the Okyenhene to have the dual-carriage Nsawam-Apedwa road constructed, President AKufo-Addo pledged to commit the Ministers of Finance and Roads and Highways to ensure that the road is fixed.

Osagyefo Amoatia Ofori Panin II, who spoke through the Gyasehene and Kwabenghene, Daasebre Ayimadu Kantamanto, pledged to support the government to succeed in the fight against illegal mining.

He urged all stakeholders to join the fight against the menace and wished the President well in his second term.