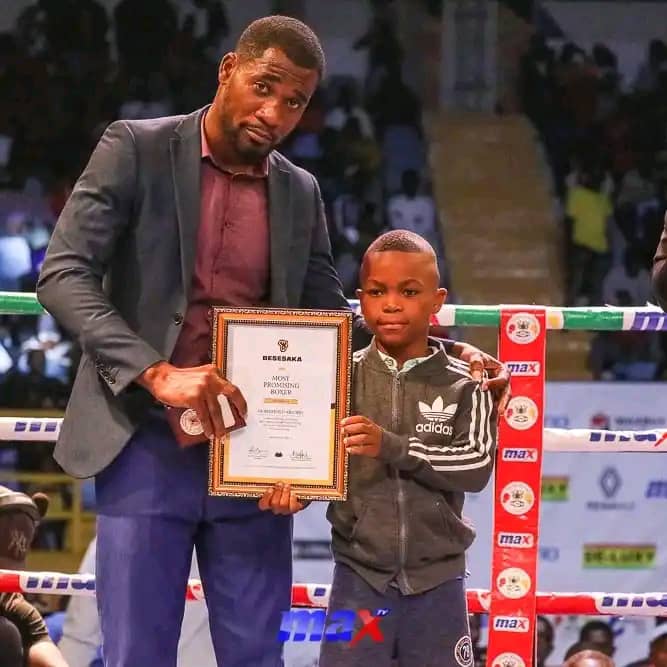 Young boxing prodigy Mohammed Ablorh also known as “The Golden Boy” was awarded by Boxing Outfit Besesaka.
The Besesaka initiative is aimed at instilling leadership potentials, moral fortitude and intellectual excellence into children on the wheels of sports;specifically Boxing.
The skillful and eloquent kid Mohammed Ablorh took part in the Boxucation Camp and excelled. He was therefore awarded as the Most Promising Boxer.
Presentation of the award was done on The Deluxy Professional Boxing League Platform by Ring Announcers Mohammed Amin Lamptey and Samuel Opoku Amoah ( Sam Nana Gold).
In what was a delectable moment and an even more admirable speech, Ablorh, the son of Former African and Commonwealth Boxing Champion in the 1990s, thanked all who had contributed to his journey: IMAX media for the platform and Besesaka for the moulding.
He promised to go all out to win laurels in all endeavors.
The Deluxy Professional Boxing League is an initiative of Imax Media Group Promotions in collaboration with The Ghana Boxing Authority and sponsored by MaxBuy, Tecno, TCL, Renault and headline sponsors Deluxy Acrylic Paint.