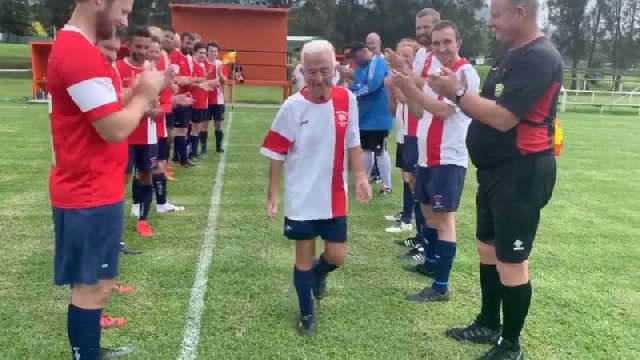 A British football fanatic will retire from the game on Friday, playing his last competitive match at the age of 80.

Peter Webster, who lives in Wollongong, Australia, said he had known for a while that he did not contribute to matches as much as he once did.

“It has been on the cards for quite a few years,” he told the BBC.

“You get more and more game when you think, ‘I’m wasting the shirt out there’. You know yourself.”

Mr Webster was born in Preston, England, but moved to Wales in 1948.

He only started playing the game competitively at 15, having gone to a school where rugby dominated.

The former steelworker played for many teams in Welsh leagues in his 20s and 30s, before moving to Australia with his wife Moira and three children in 1981.

Mr Webster said he had been surprised to find football was so advanced in Australia, and that he “would rather play in 38 degrees Celsius than 38 degrees Fahrenheit”.

As well as playing his last match for Wollongong’s Figtree Football Cub, Mr Webster was also retiring as the club’s groundsman.

He planned to arrive early for Friday night’s game against Russell Vale, the league leaders, so he could help put up the goal nets.

He would also have a word with the opposition to make sure they did not take it easy on him, he added.

“In my first few years when you’re playing, you wake up on Sunday all bruised and it’s gone by Monday. Now it’s Monday before I feel the bruises and it’s the following Saturday until they’re gone.”

Mr Webster is such a legend in the local game that there is even a competition named after him – the Peter Webster Cup.

“Usually you’ve got to pay for it, or be dead. But I’m not paying for it and I’m not dead so I thought I’ll see if I can play in it,” he said.

The secret to his longevity had been keeping up with playing, he said. While he used to run and cycle, most of his exercise these days came from walking his granddaughter’s dog.

“I’m not a good runner. I’ve bumped into players from other teams and they say: ‘This is the third time we’ve seen you running this week – you must enjoy running. But I say, ‘no – I enjoy playing football.'”

Mr Webster said he was not sure how he would feel after his final match, but he hoped to continue having a kick-about with players at the club.

He also intended to watch more of his grandson and granddaughter play football – he had often missed games previously because he was playing himself.

His wife said she was looking forward to her husband doing more jobs around the house.