Tech lifts world stocks as economy back in focus 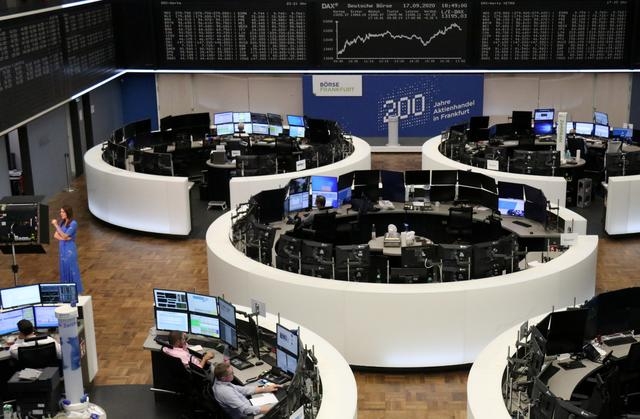 First indications from global surveys about economic activity in September gave a gloomy picture for Europe with rising COVID-19 infections leading to a downturn in services.

“This strong performance on the part of U.S. stocks is likely to translate into a similarly positive open for European stocks,” said Michael Hewson, analyst at CMC Markets in London.

“However there is rising concern that in light of surging infection rates across Europe, and the beginnings of a rise in hospitalisations, that the economic rebound from the lockdown lows is set to finish the year with a whimper,” he added.

The PMI survey showed euro zone business growth ground to a halt this month as the service industry shifted into reverse, knocked by a resurgence in coronavirus cases that pushed governments to reintroduce restrictions.

French business activity slowed to a four-month low in September, while Germany’s private sector continued to recover from the coronavirus shock.

Earlier, MSCI’s broadest index of Asia-Pacific shares outside Japan .MIAPJ0000PUS rose 0.2% for its first gain this week, but the mood was hardly bullish. Japan’s Nikkei .N225 returned from a two-day holiday to slip 0.1%.

In foreign exchange markets, the standout mover was the gaining dollar, which was up 0.10% against a basket of six major currencies .DXY at its highest level since July 27.

“Risk aversion on the back of new COVID-19 infections affecting Europe more directly remains an important factor this week,” UniCredit strategists said in a note. “This means that the USD is likely to remain firm in its role as preferred safe-haven currency.”

Meantime the euro EUR= hit a seven-week low and was last down 0.12% at $1.1693, on concerns about coronavirus infections and after the tepid European surveys.

Commodities were also weighed down by the robust dollar and worries linked to economic impact of a second wave of COVID-19.

“A resurgence in cases could prove to be a stumbling block for the demand recovery, although any lockdowns moving forward are likely to be more targeted and localised,” said ING commodity strategists Warren Patterson.

In bond markets, Italy’s 30-year bond yield fell to a record low as the country’s debt remained supported after local elections reduced the risk of a snap election.