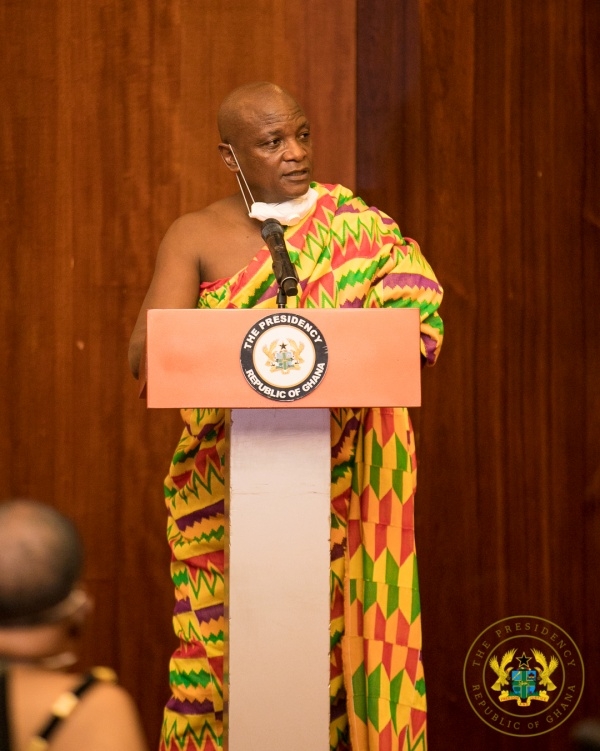 The SAS Finance Group, of which the Agbogbomefia of the Asogli State, Togbe Afede XIV, is CEO, has denied serving as a transaction advisor for an intended establishment of a national gold royalty company during the Mills-Mahama administration.

A statement signed by the Executive Director of the SAS Finance Group, Mr Sena Agbo, dated Friday, 4 September 2020, said: “Our attention has been drawn to images circulating across social media platforms purporting to suggest that SAS Finance Group was advisor to the government of Ghana between 2011 and 2012 on the establishment of a Minerals Royalty Company”.

“We wish to state that SAS was invited to a consultative meeting in 2011 on the establishment of 100% state-owned entity to hold Ghana’s gold assets, including its 10% carried interest in gold mining companies, and to receive royalties due to the state”.

“Togbe Afede XIV, CEO of the SAS Finance Group, attended this meeting, like many other similar meetings at various ministries and under different governments. SAS was never given a mandate to act as transaction advisor, neither was the firm or Togbe paid for attending this meeting”, the statement noted.

Just on Thursday, 3 September 2020, the President of the National House of Chiefs, said he does not see why the Agyapa Royalties deal should be shrouded in secrecy.

The Agbogbomefia of the Asogli State added: “Even the Attorney General has issued a statement that showed disapproval on this transaction”.

In his view, “tax havens basically serve two purposes: helping you to avoid tax or ensure secrecy”, noting: “I don’t see why a national transaction should become a secrecy in the first place”.

“But more important for me”, Togbe Afede XIV said, “is the attempt to use my name and the national house of chiefs to grant legitimacy to this transaction”.

He revealed that the National House of Chiefs “would issue a statement promptly to deny that this ever emanated from the house”.

The President of the National House of Chiefs also denied ever condemning the flagbearer of the National Democratic Congress (NDC), former President John Mahama, for sharing on his Facebook timeline, a statement authored by Bolgatanga Central MP Isaac Adongo, in which the lawmaker accused President Nana Akufo-Addo and what he referred to as the “Akyem Mafia” and their cronies of seeking to appropriate Ghana’s gold resources to themselves through the Agyapa deal.

“In the first publication, the Volta House of Chiefs was alleged to have blasted the NDC and alleged that we have said that we are tired of the NDC. The second one was labelled: ‘Announcement to all Voltarians’, which was supposedly from Volta chiefs to the effect that since 1992, the Volta Region has supported the NDC party because of former President Jerry John Rawlings and that we have nothing from our support.”

“I have issued a press statement in the name of the Asogli State to disassociate myself from those publications because some of them came with my picture, so, we have written to deny that any such statement was issued by chiefs of the Volta region,” he said.

“But only yesterday, a third one made the rounds and was carried by various channels: Ghanaweb, Myjoyonline, Graphic Online et cetera; some of them probably found out later that it was fake and they promptly removed same. It was titled: ‘House of Chiefs condemned ethnocentric comments shared by John Dramani Mahama’. Again, this publication came with my name but this one went further to forge the letterhead of House of Chiefs. This is extremely mischievous and needs to be condemned without any reservations and in no uncertain terms,” he said.