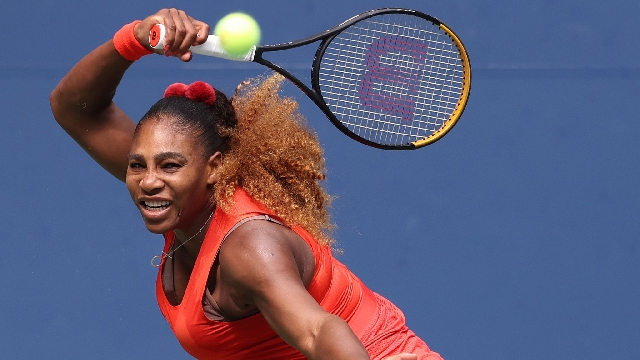 Serena Williams feels her level was closer to a record-equalling 24th Grand Slam at this US Open than it was in her four most recent major final defeats.

The American was outstanding in the opening set of her semi-final against Victoria Azarenka before losing 1-6 6-3 6-3 at Flushing Meadows in New York.

She needed a medical timeout for an Achilles injury in the deciding set.

“I feel like other times I’ve been close, I could have done better. Today I felt like I gave a lot,” she said.

Williams, who turns 39 later this month, has not won a major since the 2017 Australian Open when she was eight weeks pregnant.

Since returning to the tour after having her daughter Olympia she has lost four Grand Slam finals – Wimbledon and the US Open in 2018 and 2019.

She lost those finals in straight sets, seemingly burdened by the weight of expectation at the final hurdle having put in some dominant performances in previous rounds.

And she was denied another chance to equal Australian Margaret Court’s long-standing record as 31-year-old Azarenka impressively fought back to reach her first major final in seven years.

However, Williams will have another attempt at the French Open later this month after confirming she will “definitely” play on the Roland Garros clay.

Two-time Australian Open champion Azarenka, meanwhile, has a more immediate opportunity of her own to win another Grand Slam title when she plays Japanese fourth seed Naomi Osaka in Saturday’s final.

The Belarusian was one of Williams’ great rivals in the first part of the last decade before also taking time off to have a child.

Azarenka gave birth to son Leo in December 2017 and her career continued to be stalled by a lengthy custody battle.

“I don’t know how she stayed positive, to be honest,” Williams said.

“That’s a good lesson for all of us. No matter what, you just got to keep going. Hopefully she keeps living her dream.”