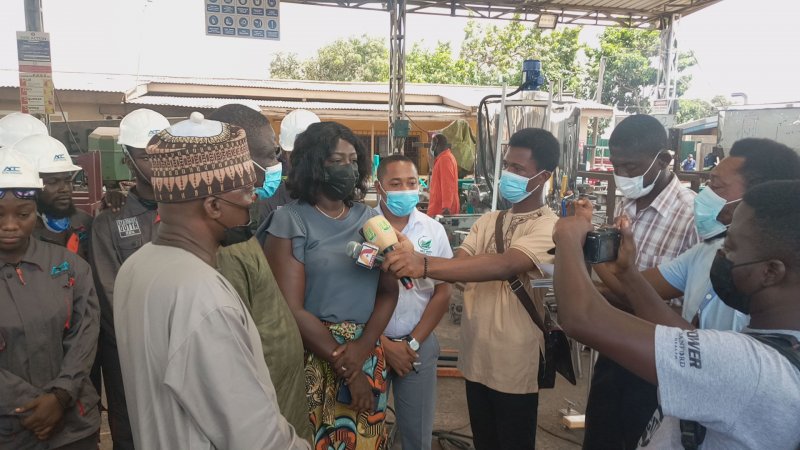 Ten youth at the Ablekuma North Constituency in the Greater Accra Region have begun a six-month technical training to acquire the skills that will help tackle the infrastructure needs of the constituency.

Sponsored by Ms Sheila Bartels, the Member of Parliament (MP) for the Constituency, the training aims at providing them with skills to construct metal bridges over roads and drains, among other things.

“We hope they will use the skills they will acquire to speed up development in the Ablekuma North Constituency,” Ms Bartels said.

McHammah Engineering Company Limited, manufactures of agro-processing and other specialised equipment, is taking the youth through the training, in partnership with the African Career Centre and School of Engineering.

During a visit to the Company at Kwashieman in Accra to see at first-hand the progress of the trainees, Ms Bartels said the youth were selected based on their interest and basic technical knowledge in the field.

She said the programme would not only provide skilled manpower for the development needs of the area but to other constituencies as well as the ministries, departments and agencies.

Mr Kofi Ofori, the Ablekuma North Municipal Chief Executive, said the Assembly would work with the MP to ensure that the trainees used their skills profitably in the Municipality.

He encouraged them to pursue their studies diligently and seek clarification whenever the need arose to master the skills they were being taught.

Mr Ebenezer Kakra Hammah, the Chief Executive Officer of McHammah Engineering Company Limited, said the trainees had been taken through welding, metal fabrication, structural construction, and spraying among others.

He said the group had improved a lot over the past two weeks since they started the programme and could now operate some machines that they had little or no knowledge about at the initial stages.

Mr Isaac Kodi, the Headmaster, African Career Centre and School of Engineering, expressed optimism that the institution’s partnership with McHammah Engineering would go a long way to boost Technical and Vocational Education and Training (TVET) in the country.

He called for the need to change the negative perception about TVET as it was the main avenue for infrastructure development.

Ms Juliana Teye, a trainee, who holds a Bachelor’s Degree in Procurement and Supply Chain Management from the University of Cape Coast, said she joined the programme to learn bridge construction and fabrication works.

“I also want to become an all-round engineer in order to gain extra knowledge aside my Bachelor’s Degree,” she said.

“The programme is a good initiative. And the fact that I am a female and a part of this group clears the perception about a woman being limited to a certain kind of job.”

Isaac Addy, another trainee, said he was happy about the improvement in their skills over the past two weeks and that but for the training he and his colleagues would not have been able to operate some machines they were operating now.

“I will advise young people not to see white collar jobs as the only means to make a living; the youth can equally make a decent living by pursuing technical and vocational careers,” he said.