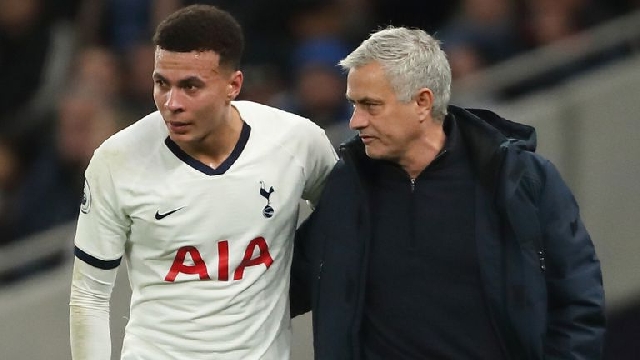 Jose Mourinho said he was “tired” of questions about Dele Alli and expects the midfielder to stay at Tottenham beyond this transfer window.

The Spurs boss did suggest the 24-year-old, limited to just 45 minutes’ play this season, needed to improve.

Alli has been included in the squad for Thursday’s Europa League tie at North Macedonian side Shkendija (19:00 BST).

“He is coming and he has a chance to play. It’s important for him to perform,” said Mourinho.

The addition of forward Gareth Bale on loan from Real Madrid has added to that competition, while speculation over Alli’s future increased after Paris St-Germain showed interest in him.

“When the squad becomes competitive, the players have to have an answer and perform,” the Spurs boss said.

Mourinho, though, added that Alli “will have his opportunities”, and that it was “no problem” to have him at the club.

He said: “I am not tired of Dele because he is a great kid, but I am tired of questions on Dele.

“I always feel that 99% of the responsibility is the player. I have 1%. Me and my staff and the people that work, everybody has 1%.”

Midfielder Harry Winks was confident his team-mate would get his place back in the first team.

“Dele is a top player – you don’t get to the level he has got through luck,” said the 24-year-old midfielder.

“You get there through hard work and ability. It might be a dip in confidence, I don’t know what the situation is but he is a top pro.

“Everyone in the team will back me in saying that he will get back to his best form and he will do.”

Meanwhile, Mourinho said he was “not happy” with the situation after Tottenham’s Carabao Cup match against Leyton Orient was called off after some O’s players tested positive for coronavirus.

The decision was announced two hours before the scheduled 18:00 BST kick-off at the Breyer Group Stadium.

“I process our calendar and my bad feelings to the unfair schedule we have got,” he said.