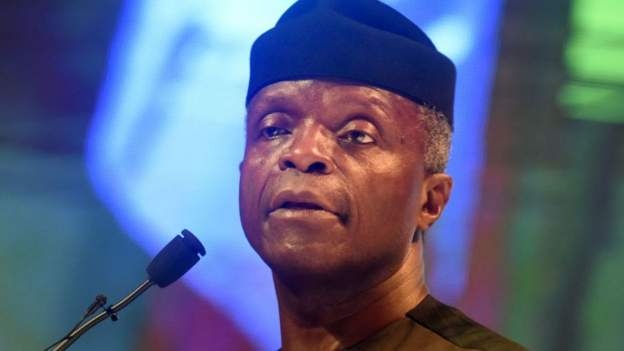 Nigeria’s Vice-President, Yemi Osinbajo, has promised justice for the victims who were shot during Tuesday’s protest at the Lekki toll gate in the commercial hub Lagos.

Amnesty International has said at least 12 people were killed by soldiers and police in two locations in the city, although Nigeria’s army dismissed the reports as “fake news”.

Witnesses have told the BBC that men in military camouflage shot at protesters.

The vice-president said some policemen were also killed “in different parts of Lagos and other states”.

“The pain of these terrible events is palpable in our towns and cities, and some losses are irreplaceable, but we can and will get justice for all of them,” Mr Osinbajo said on Thursday in a series of tweets.https://platform.twitter.com/embed/index.html?creatorScreenName=BBCNews&dnt=false&embedId=twitter-widget-0&frame=false&hideCard=false&hideThread=false&id=1319044706450444295&lang=en-gb&origin=https%3A%2F%2Fwww.bbc.co.uk%2Fnews%2Flive%2Fworld-africa-47639452&siteScreenName=BBCNews&theme=light&widgetsVersion=ed20a2b%3A1601588405575&width=550px

His reassurance follows worldwide condemnation of the crackdown on protesters -who initially wanted police reforms but have broadened their demands to include reforms to the way the country is run.

The vice-president said he had paid hospital visits to some of the victims.