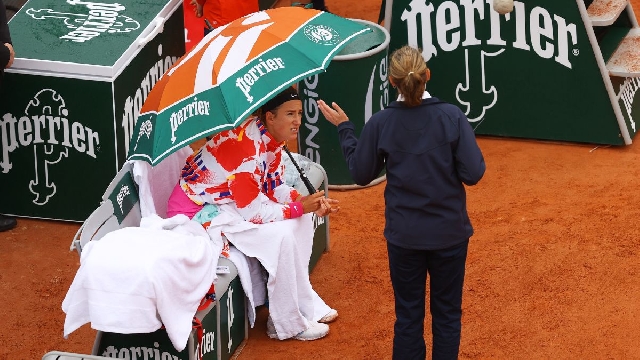 The French Open got off to a wet and chilly start on Sunday, with the former world No.1 Victoria Azarenka walking off court during a lull in proceedings because of the cold weather.

The tournament’s 10th seed was 2-1 up against Montenegro’s Danka Kovinic in the first round when she took matters into her own hands after light rain paused the match.

When she was asked to remain on court by a match official while a decision was taken about whether play should continue, the Belarusian tennis player said she would not carry on waiting outside. “I’m not going to sit here because I’m going to get frozen,” she told the supervisor.

After complaining that it was only 8 degrees Celsius (46.4 degrees Fahrenheit), the two-time grand slam winner said she lived in Florida and was “used to hot weather.”

When the match resumed 50 minutes later, the Belarusian quickly took control of the game, beating her opponent 6-1 6-2 in just over an hour.

Her victory was watched by just nine spectators, according to Reuters.

Speaking about the interruption, Azarenka said: “I think it’s very tricky at the moment to have these conditions. So definitely not going to sit here and complain, but sometimes I think there are smarter ways to handle situations.”

Over in the men’s draw, Spain’s Rafael Nadal, who is hoping to win his 13th French Open title, has also stressed that conditions are different this year, after the clay tournament was delayed from May to late September because of the coronavirus pandemic.