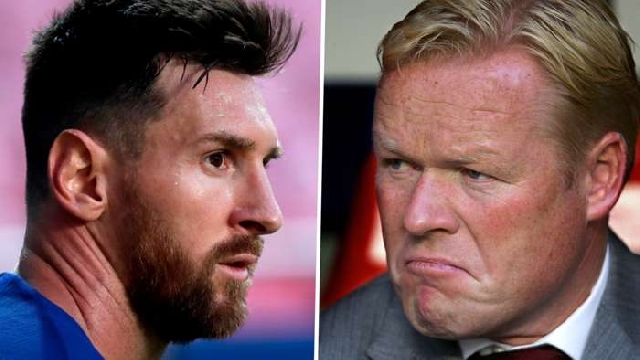 The Dutch coach says his main goal is to create an environment in which the Argentine can shine after a turbulent start to his reign at Camp Nou.

Ronald Koeman has responded to Lionel Messi’s call for unity at Camp Nou, admitting he doesn’t know if he’s “going to have a quiet life” after the Barcelona superstar’s latest quotes.

Messi pushed for a move away from Barca in the wake of their 8-2 demolition at the hands of Bayern Munich in last season’s Champions League quarter-finals.

The 33-year-old sought to trigger the release clause which allows him to leave Camp Nou at the end of any season, having grown frustrated with the way the club is being run at boardroom level.

However, Barca blocked the move with the help of La Liga, insisting that the clause in question had expired in June, and that the Argentine could only leave if his €700 million (£638m/$820m) buyout clause was met.

Messi ultimately decided to see out the final year of his contract to avoid a drawn-out legal battle, but revealed exclusively to Goal at the start of August that he no longer feels that the Blaugrana can compete for the biggest titles on offer at the highest level.

Barca’s all-time record goalscorer criticised the club once again following Luis Suarez’s departure to Atletico Madrid last week, writing the following message to his former team-mate on Instagram: “You did not deserve for them to throw you out like they did.

“But the truth is that at this stage nothing surprises me anymore.”

Messi was included in Koeman’s first starting line-up of the new La Liga season despite his comments, and scored a penalty during the 4-0 home win against Villarreal on Sunday.

He has since justified venting his frustrations publicly in a lengthy interview with Spanish publication SPORT, insisting he has only ever tried to do what’s best for Barca and that he will continue to give his all to their cause.

Asked to comment on Messi’s rallying cry at a press conference on Wednesday, Koeman told reporters: “I don’t know if after Leo’s quotes I am going to have a quiet life.

“I don’t think so because always there’s something here but it is very positive the captain asks for unity, I hope we all are more calm in respect of what we experienced in the last weeks.”

The Dutch head coach added on how he plans to keep the six-time Ballon d’Or winner happy: “I don’t know if it is entirely in my hands. As a coach I think we must find the best possible team to help him to shine, finding a position where he can produce his best performance as he always did for this club.