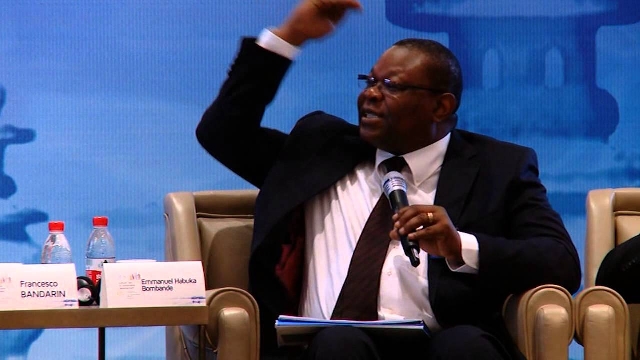 The Minister of Special Development Initiatives, Mrs Mavis Hawa Koomson, must voluntarily step aside for firing warning shots at a voter registration centre in the Awutu Senya East (Kasoa) Constituency of the Central Region, security expert Emmanuel Bombande has said.

“She should take the decision herself and step aside”, Mr Bombande told Benjamin Akakpo on Class91.3FM’s Executive Breakfast Show on Tuesday, 21 July 2020.

“She should not be called to resign. What she did was completely unacceptable, so, the onus of responsibility in leadership, should speak to her this morning to step aside”, the Minister of Foreign Affairs in the erstwhile Mahama administration said.

Mrs Koomson, who is also the MP for the constituency, has explained that she felt threatened by some marauding opponents, thus, her resort to her gun, since, according to her, she had no bodyguard around at the time of the incident on Monday, 20 July 2020.

Meanwhile, a Deputy General Secretary of the governing New Patriotic Party (NPP), Nana Obiri Boahen, has said security analysts like Mr Bombande, must be fair and objective in their analysis of such issues and not only come out of their shells when there are infractions committed by NPP members.

Speaking on various condemnations and calls on Mrs Hawa Koomson to resign, Mr Obiri Boahen said although the lawmaker’s actions were condemnable, she is not being treated fairly by her critics.

“We all condemn what happened but do you think, devoid of political partisanship, it will be right to call on Hawa Koomson to resign?” he asked Benjamin Akakpo on the same show.

“Do you think that will be fair to her?” he stressed, adding: “There is something known as audi alteram partem (listen to the other side). I listened to her yesterday [Monday], and, as a lawyer, let’s be very honest to ourselves: don’t we have an issue of self-defence?”

“I am not, as it were, trying to applaud her, but put yourself in that scenario: there’s no bodyguard, your people are being attacked, you are also being attacked, what do you do?”

“Whenever disturbances happen, we should condemn them but we need to probe further; what generated those disturbances – Banda, Kasoa, Bole Bamboi and a lot of places”, he urged.

Nana Obiri Boahen noted that the violence was inevitable because of how the National Democratic Congress (NDC) aggressively resisted the Electoral Commission’s decision to compile a new register of voters for the 7 December 2020 general elections.

“Obviously, I am not surprised. When the EC said they were going to compile a new register, hell broke loose in this country”, he said.

“Some said they’ll resist with all their blood. Some said they will resist with their strength and their might. Some said: ‘Arise, resist oppressors’ rule’. Some said: ‘Walahi, over their dead bodies’. Elvis Afriyie Ankrah said they will use their blood to fight against the compilation of a new register. So, if you have a third eye in politics, you could make the prediction that: ‘We’re going to encounter a lot of problems in this country’”.

“When the Afriyie Ankrahs, Bernard Mornahs, Asiedu Nketiahs, Sammy Gyamfis, Otukonors were beating the war drums, where were these security analysts and these security experts? Were they on a different planet?” he asked.

“When people were beating the war drums, you pretended not to have heard it, witnessed it, then now that these ugly incidents are happening all over the country, you’re coming from your shells and cocoons to say ‘this and that’. You need to be objective, you need to be principled, you need to be sincere, you need to be honest. Hypocrisy will not pay”, Nana Obiri Boahen reprimanded the security analysts who have been vocal on the issue.