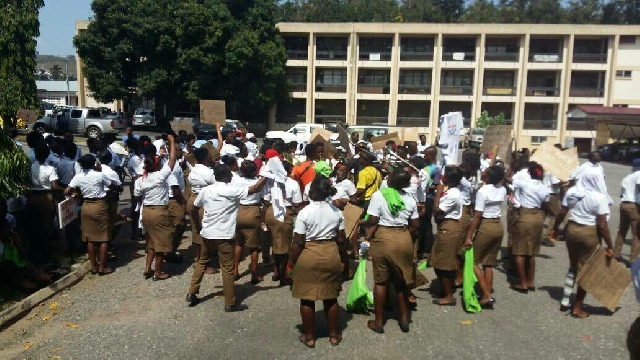 School of Hygiene student have consecutively picketed over locked-up allowances

Students of the Schools of Hygiene will receive financial clearance for their three-year backlog of allowances, the Students’ Representative Council (SRC) President, Freeheart Owusu Ampomah, has indicated.

According to him, the leadership of the Schools of Hygiene (Korle-Bu –Accra, Ho and Tamale) met the Ministry of Sanitation and Water Resources on Thursday, 20 August 2020, to iron out how to resolve the pending issue and the way forward.

Mr Ampomah told Class News that it was realised that a section of students of Ho and Tamale Schools of Hygiene had problems with their bank details.

As a result, the clearance could not take effect.

The Schools’ leaders were, therefore, asked to make the documents available to be signed by the deputy minister of finance.

“Some of the students’ details are not complete, like bank details and e-zwich details, so, leaders should go and collate data and bring it to make it complete by today Friday or following Monday,” he added.

On Monday, 17 August 2020, the students converged on the premises of the Ministry of Sanitation and Water Resources to picket, for the second time, after a previous action on Thursday, 6 August 2020 over their locked-up allowance.

According to the students, their allowances have been completely scrapped without reason despite the government restoring allowances for other nursing students, adding that, though they are the highest fee-paying nursing school, they receive no money from the government.

To top it all, they get sacked over unpaid fees.

These have left them with no other option than to take action.

On Tuesday, 21 July 2020, Class News reported that the students had boycotted their final exam for the same reason.

A section of the students bemoaned their current situation, posing questions as to why they have been left out.

The students demanded the financial clearance due them, an extension of their final-year examination (which they boycotted earlier) and also that school fees defaulters be allowed to sit the examination since the government owes them.

One of them said that President Akufo-Addo made them a promise during his campaign prior to the 2016 elections, “to pay the allowance” and “give special treatment to students of the School of Hygiene.”

He said: “This time around, we need to get our money. We are receiving our money because it is due time for us to receive the money. We are beneficiaries, so, why are they doing this to us? When the President restored the allowances, even before the president came to power, it was at the School of Hygiene forecourt that he promised that he was going to pay the allowance and that he was going to give special treatment to students of schools of hygiene. Is this the special treatment?”

Another student, who had resolved to sleep at the premises of the Sanitation Ministry until attention is given to them, questioned the whereabouts of a supposed amount of money that was initially allocated to them because their details were taken as beneficiaries.

“I wouldn’t have been here if I am not determined to sleep here. One thing I want to ask the government and the Ministry is, during the launch of this allowance, the President allocated some amount to be paid to us. I think it is GHS232 million. Where is our share of that money?” she quizzed.