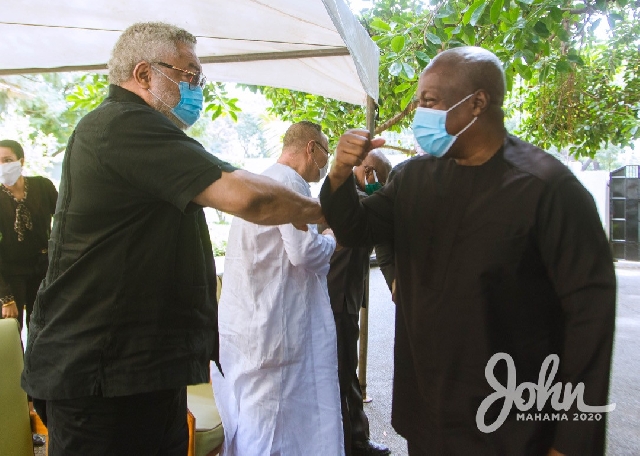 At a press conference on Monday, 23 November 2020, the General Secretary of the NDP, Alhaji Mohammed Frimpong, said: “With what he [Mr Mahama] did with the demise of former President Mills, he should not be allowed to do the same with the death of our beloved former president Rawlings”, adding: “Ghanaians should not oblige to that”.

Alhaji Frimpong also accused the main opposition National Democratic Congress (NDC), whose founder was the late President Rawlings, of hypocrisy, saying when the late military leader was alive, “John Mahama desperately wanted to silence him and now that Rawlings is no more, Mahama finds it expedient to utilise his death to galvanise support for his weak base within the NDC rank and file and the country at large to salvage his 2020 campaign which is going nowhere.”

“Suddenly, the individuals within the NDC under the current leadership of John Mahama, who publicly vilified Rawlings, have rediscovered a new voice proclaiming themselves to the true adherent of his ideals and those who used foul languages against Rawlings are now hailing him”, Alhaji Frimpong added.

The NDP’s accusations tie in with similar ones made by Vice-President Mahamudu Bawumia on Saturday, 21 November 2020.

According to him, the NDC is a party of hypocrites and dishonest people who denigrated their founder but today, after his death, are marching for his values of probity and accountability.

“When Jerry John Rawlings was alive, they [NDC] were not marching for probity and accountability; they were rather disrespecting him, they were calling him ‘barking dog’, ‘the Volta god’, isn’t that the case?

“They were disrespecting him, they got babies with sharp teeth to attack him; isn’t that the case? Today, now that he’s dead, they are saying they are marching for probity and accountability.

As part of activities to commemorate his passing, the NDC has been organising a series of activities such as vigils and marches in the late president’s memory.

The party’s General Secretary, Mr Johnson Asiedu Nketia, at a point, even accused President Nana Akufo-Addo and the government of attempting to “hijack” the funeral of the late military leader.

Dr Bawumia, however, said for a party that “disrespected” its own founder while he was alive, he found it “dishonest” for the NDC to profess the values of Mr Rawlings now that he is no more.

“Today, after the death of the former President, may his soul rest in peace, Jerry John Rawlings, they are now there saying they are marching in his honour for probity and accountability.

“Where was the probity and accountability when they were chopping the SADA money?